Our “IVADO Student Portraits” initiative consists of meeting students from our community to share their backgrounds, motivations and ambitions! We interviewed Jacinthe Pilette, IVADO MSc scholarship student at the Université de Montréal. 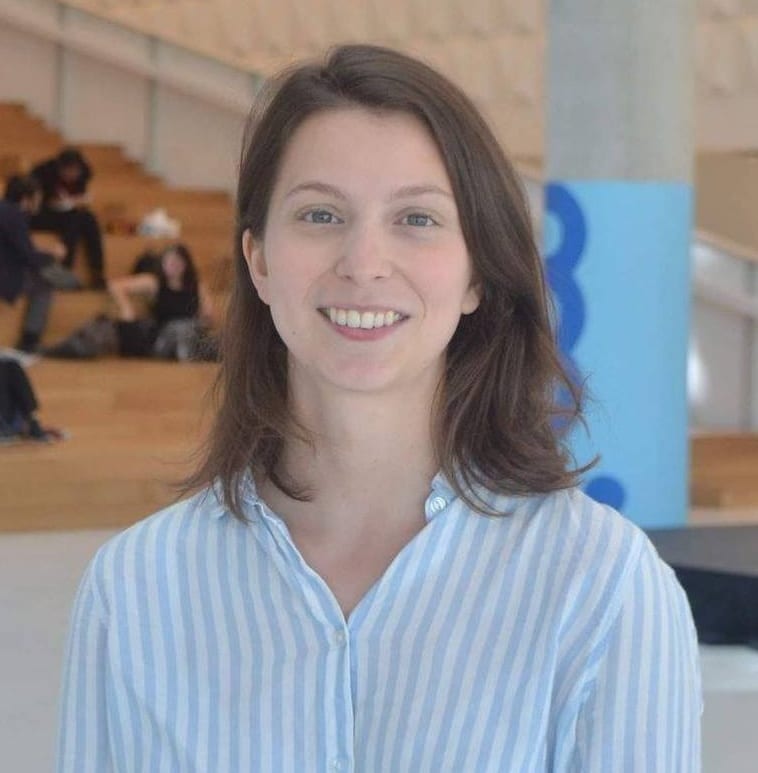 I’m currently studying toward my master’s in particle physics at Université de Montréal. I’ve always been curious about our universe, what it’s composed of and the laws that govern it. Physics enables me to answer these Big Questions and to quench that curiosity! I’m especially interested in particles, because they make up all the ordinary matter in the universe (we still don’t know the composition of the other type of known matter; i.e., dark matter).

I got my Cégep diploma in natural sciences at Collège Lionel-Groulx in Sainte-Thérèse, and then my BSc and MSc studies in physics at Université de Montréal. As an undergrad, I did two summer internships in the Department of Physics. During the first, I was fortunate to visit the SNOLAB in Sudbury, Ontario, which is located in a mine two kilometres  underground and is used for a number of experiments studying dark matter. My second internship led me to my current master’s research project.

Initially, it was curiosity. I wanted to challenge myself and learn to work with machine learning, a skill that is increasingly in demand on the job market. Also, as someone who’s had difficulty with  coding, it was a way to push myself. It’s also a tool that’s being increasingly used in physics for various research tasks. In particle physics, digital intelligence is helping us in the search for new particles. This is a field of application that appealed to me, and I wanted to see what discoveries we might make with digital intelligence.

I’m working in a research group that’s involved with the ATLAS Experiment, being conducted using the Large Hadron Collider (LHC). The LHC is an immense circular particle accelerator located on the French-Swiss border. Protons are accelerated to nearly the speed of light and made to collide with each other, and the resulting debris is observed. ATLAS is the detector that enables us to collect and observe that debris. My project involves applying a machine learning algorithm to the data from this detector to try to identify traces of new physics that should allow us to answer many questions in particle physics.

Patience, creativity and teamwork are all essential qualities for working at the LHC and in digital intelligence. Often, we take baby steps to find the best learning algorithm for a given problem. Creativity is vital in finding solutions to the challenges of applying algorithms to complex data like those from the LHC, and teamwork is needed to work in collaboration internationally, exchanging ideas and providing mutual assistance.

I love physics, but I also love talking to people about it and sharing my knowledge. So I eventually want to teach physics in Cégep, but get involved in mainstream science communication. I also hope to contribute to making physics a more attractive and welcoming field for women and other minorities, as physics is still a very male-dominated field.

The book Quest-ce que le boson de Higgs mange en hiver et autres détails essentiels by physicist Pauline Gagnon, published in English as Who Cares about Particle Physics?: Making Sense of the Higgs Boson, the Large Hadron Collider and CERN, is an excellent plain-language introduction to particle physics. Or, you can tune in to CKVL 100,1 FM on May 27 at 8 p.m. for the program Réflexions avec Pierre and hear me talk with the host about particles, the LHC and my research project!

I am convinced that digital intelligence has the potential to improve our living conditions and research capabilities. But we need to make sure the algorithms and technologies developed are built and used ethically and equitably. As stakeholders in digital intelligence, including us students, we have a duty to educate ourselves on the equity and inclusion issues surrounding digital intelligence and ensure they contribute to responsible and informed application of these innovations as we enter the labour market.